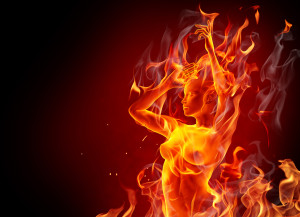 Rage: It gets pegged as a gangster emotion that can destroy you, your opportunities and relationships, but if you just have a safe and private refuge to express anger full throttle, your rage can be your most heroic friend, defining your personal integrity.

When rage is given room to breathe, instead of shoved into denial, it’ll help you to see wounds underneath that need to be healed, and it’ll generously guide you towards cleanly engaging in a compassionate yes to yourself and an unapologetic no to someone or something that doesn’t jive with that self-compassion. Rage is your anchor to dignity, your compadre to passion and your backbone to self-loving love at all costs.

The kind where you feel betrayed by something, someone, somewhere and it’s entirely out of your control?

What do you do when your blood boils?

Do you take the high road? You meditate. You do yoga.
Do you throw yourself into getting your shit together?

Maybe you get shell-shocked by a bitter aftertaste when “trying to be assertive” turns into an epic vent, and you accidentally (or deliberately!) spew your corrosive elements onto your partner, your lover, the store clerk, or the AT&T rep. And maybe you tell yourself afterwards you must keep that venting under control?

Maybe when you manage to control it, you turn into a gremlin. The gremlin wears a sign around its neck that says “I’m fine”, but, meanwhile, you want to tear the house apart in uncontrollable righteousness. And then you feel either crazy or guilty for being irrational.

Or maybe you play out fantasies of redemption in your head. Recycling the rage over and over through imagined scenarios that never get redeemed.

Maybe you tell yourself it’s not worth sweating the small stuff. Focus on the bright side.
You deny the rage, but wonder how did you get so pissed at the unfairness of Life? The rage comes out in a tirade of complaints about “other people.”

There’s something bigger lurking just below the surface of rage.

It’s an ancient rage for ALL Rage. It’s a Rage for all the times anyone has EVER betrayed, disrespected, used, abused, abandoned, rejected, or taken advantage of you. And somehow you also know that under the rage is hurt. A hurt that needs compassion, and perhaps forgiveness. So you spin yourself in circles ‘trying to love yourself’ or ‘trying to forgive’, before acknowledging or giving voice to your rage.

We need anger. To access our dignity. To access our grace. To access our truth. To access the core of our boundaries that feel good and right and true. But before we can get to that clarity, having the permission to feel the rage full throttle without lashing it onto someone else, helps to define what the clear YES to yourself is, which lives behind the NO to someone or something else. These kernels of “yes” and “no” are what define our personal integrity.

When you jump into trying to forgive, before acknowledging or expressing anger, it’s a recipe for either disaster or depression, cutting yourself off from your own power.  Sometimes, the “happy place” is giving your rage a place to go so that you can get to that next step, of cleanly communicating your hurt or deliberately making clear boundaries. And then, there’s no ‘trying to love’ or ‘trying to forgive’, it happens naturally on its own.

Rage gets a bad rap in our society. Especially for women, showing anger elicits judgments as “bitchy”, “pms-ing”, “being a piece of work”, “emotional”, or “over-reacting”, and so we throw ourselves into spiritual-rising-above, telling ourselves that we’re better than our anger; we deny it and, by default, stuff it down. Deep in our cells there’s a message that if we show anger, the dread “unlovable” threat looms before us, which lures us to the unsavory thing called rejection.

When we’re taught to be ‘good girls’, rage is rarely allowed in that equation of ‘being loved’ or  ‘being good.’ In fact, rage is one of the most judged emotions in our society, because frankly, it makes people uncomfortable. Rage gets labeled as a ‘negative’ emotion, so far too many press it down, and by default start cutting themselves off from the rest of their emotions. This is why antidepressants are the third most prescribed drug in our country. When rage has no where to go, it brings you down. Way, way down.

Or, unattended anger can go in another direction. It’s the unconscious kind of anger that explodes, because it’s been repressed for so long, or there’s a wound underneath that isn’t dealt with. I’m not encouraging blasts of unconscious anger onto others, but rather, allowing your rage to be your guide in a healthy way, a way that will help to illuminate your personal integrity.

You need your rage.
Your rage is surfacing for a reason: to set yourself free.
All you need is the permission to feel it and access it in a private and safe space.

So there you are.

In your car. And someone cuts you off. At last. It’s like heaven.

An exquisite arpeggio of fucker-asshole-dickhead torpedoes out of your mouth.

Your hands slam down on the steering wheel like a mad conductor.

In the precious capsule of your car, you send every driver directly to hell without passing go.

It feels so good.

We need these moments.

Because when rage doesn’t have a safe corridor to walk down, it stuffs itself into little cubby holes and paralyzes your soul.

When rage has no where to go, it’s like a homeless vagabond knocking on closed doors.

Your body paralyzes itself, as repressed anger commits you into the slow death of depression, and your soul sinks into quicksand.

Denying rage is like walking into a tunnel of despair. It numbs all of your other feelings and takes all of your power away.

When you deny Rage, you start to think, what’s the point.

The next time you feel the Rage, do yourself a favor.

Let her move through your blood, your cells, and your being.

Let her move through your pelvis, the center of your ability to feel safe again, despite the old age stories that accumulated once upon a time in your cells.

So you can be clear and clean and not sidestep into the passive aggressive recourse.

So you can stop being a victim, obscured and trapped by the latent energy of rage.

So you can relieve yourself from venting your toxic rambles.

So you can start to take responsibility and give yourself what you need.

So you can know what you’re saying YES to in your life.

So you can know what you’re saying NO to in your life.

Rage will give you your power back.

Give her a channel.

She will give you clarity and the fire to commit to yourself.

Let her give you courage to cut out the crap.

She will fuel your freedom.

Rage prescription 1: Take yourself on a rage odyssey. Make yourself a 15-minute to 30-minute playlist of songs that have the ammunition to unleash anger through your body. Or dive into my rage playlist here on Spotify. Then give yourself some privacy and permission to go on a wild dance unleashing your rage at home. When you move, focus on unleashing the rage particularly through your pelvis, with hip shimmies, gyrating, hip circles, and thrusting. The more primal and wild you are, the more rage will be on your side, unleashing confidence, clarity and freedom.

Rage prescription 2: Join me on an emotional journey with joy, grief, rage, lust, and flirtation, all to the infectious sound of live drums when I lead a Femme! experience. Join my mailing list to hear about the next time I’ll be leading Femme! in the Bay Area.

******
How do you move through your anger so you can express it cleanly?